Never judge a book by its cover

Ghost-writing some fiction just the other day, I tapped out those exact words. Of course, the expression is a common English idiom and the meaning a metaphor for not deciding the worth (or lack thereof) of anything, or anyone, by its outward appearance. Good advice, perhaps.

However, rereading and editing the text, I found myself wondering about book covers—you know, how long they’d been around, which are the oldest, the most famous et cetera. Before long, I was berating myself for falling into a trap I constantly warn my book coaching students about—losing focus (the ugly term for it is procrastination) yet also fascinated by a few interesting facts that emerged. I decided that this was, after all, essential research.

Did you know, for example, that with the advent of the mass press during the 17th and 18th centuries, book covers (or dust jackets as they were referred to then) were nothing but plain and functional? At first they were cloth, and then paper. Sometimes holes were cut in the front covers to display the title and author’s name, but it wasn’t until around the turn of the twentieth century when the obvious advantages of decorating book covers became apparent. And then it was on for young and old.

Avant-gardists like Alexandr Rodchenko and El Lissitzky of the Soviet Union produced some of the first radically modern cover designs during the 1920s. Aubrey Beardsley with his striking covers for the first four volumes of The Yellow Book (1894–5) was also an early influencer.

Of course, there is always an exception. Way back around 810 BC, an illustrated manuscript—the Lorsch Gospels, a collection of the Four Gospels of the New Testament—was produced. The cover was made from highly decorated, carved ivory plates. I’ll bet the guys who put it together hoped like hell it wouldn’t become a best-seller. 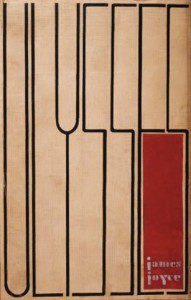 And can you tell a book by its cover—literally? How about James Joyce’s Ulysses? That amazing cover designed by Ernst Reichl in 1934 in no way relates to the book’s actual contents. But, there again, could any cover symbolise the contents of Ulysses?

Today the book cover is regarded as one of the critical selling points of a book. And with e-publishing, book cover design has taken an even more complex turn. What can look highly attractive on the rapidly disappearing bookshop shelf may look pretty banal as a website thumbnail. So, there you are. Even as we speak, it’s no longer a book cover; it’s become a ‘thumbnail’.

What do you think?